skip to main | skip to sidebar

VAMPIRE MILITARY POLICE: The Adventures of Yuriko Kumage Against The Darkness of Death - The Before and After to "KKXG: King Kong vs Gigantosaurus" Available on AMAZON!!

VAMPIRE MILITARY POLICE: The Adventures of Yuriko Kumage Against The Darkness of Death - The Before and After to "KKXG: King Kong vs Gigantosaurus". June 12, 2012 JST

The sequel to the best selling "KKXG: King Kong vs Gigantosaurus -- The Adventures of Yuriko Kumage During the Greatest War on Earth" has been released! "VAMPIRE MILITARY POLICE: The Adventures of Yuriko Kumage Against The Darkness of Death"! In addition, this book is also the sequel to the very popular "CAPTAIN YURIKO KUMAGE: Her First Adventure During the Greatest War on Earth"! How can that be? Read it and find out!! Now a blessed and beloved trilogy! Please visit Amazon.com or the Amazon Kindle for more! 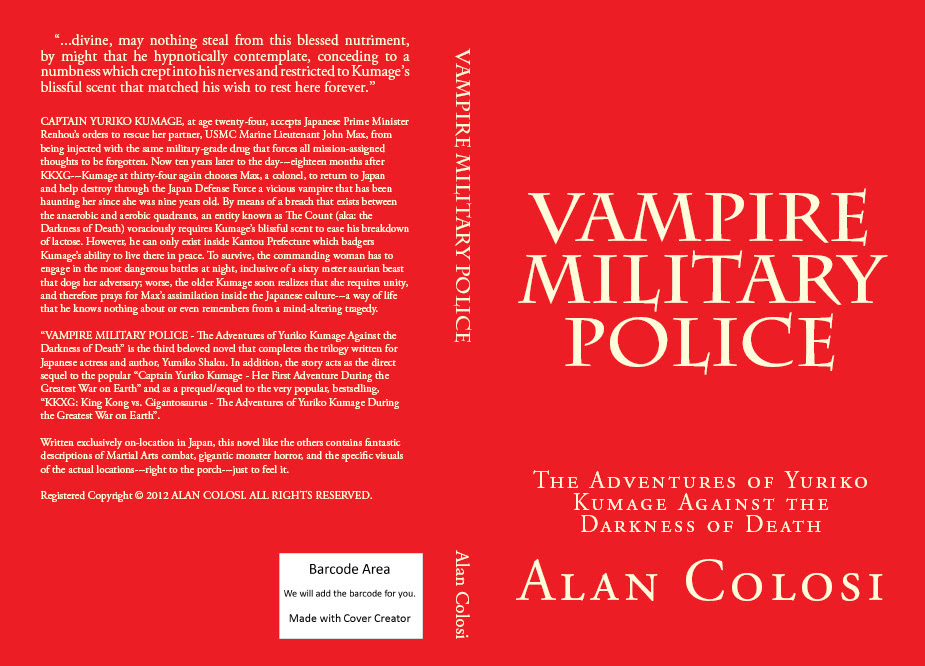 VAMPIRE MILITARY POLICE: The Adventures of Yuriko Kumage Against The Darkness of Death cover. Click the image to buy the Kindle version.


The story takes place immediately after CAPTAIN YURIKO KUMAGE; but then without warning, eighteen (18) months after KKXG!! Thank you.

CAPTAIN YURIKO KUMAGE: Her First Adventure During the Greatest War on Earth: The Prequel to "KKXG: King Kong vs Gigantosaurus" Available on Amazon!!! 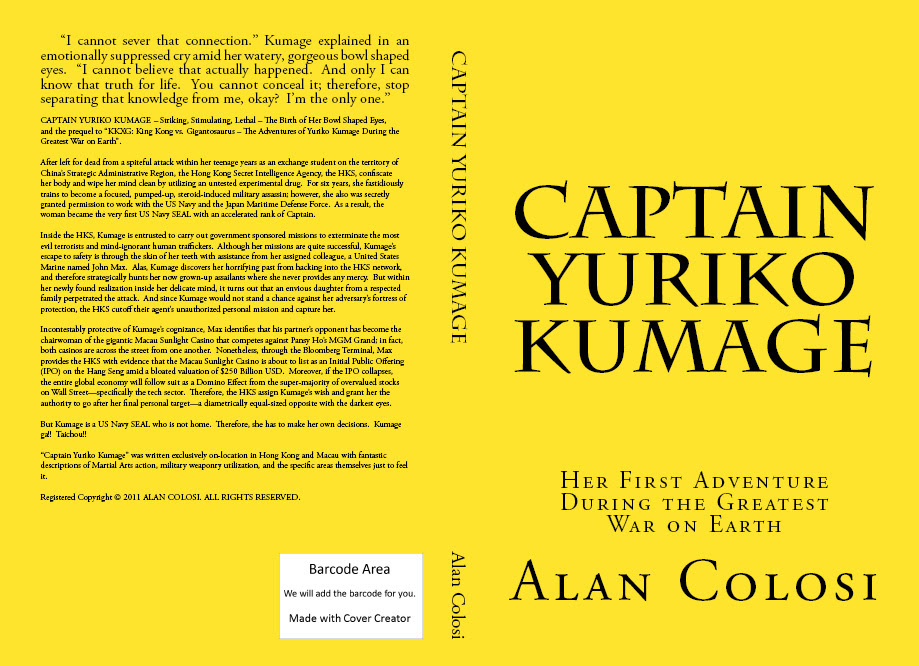 CAPTAIN YURIKO KUMAGE (First Edition): Her First Adventure During the Greatest War on Earth cover. Click the image to buy a Kindle version.

The story takes place ten (10) years before KKXG, exclusively in Hong Kong and Macau. In addition, the story was written and researched on-location inside the SAR. Please enjoy every part of it! The paperback has already been sent to Ms. Pansy Ho of Shun Tak Holdings Limited (信德集團有限公司). Thank you.

BLOOMBERG: Kylie Minogue Certainly Knew Which Umbrella to Pitch for Financial Information When it Rains. September 30, 2010 JST
Whether it's another clandestine pitch for "KKXG: King Kong vs Gigantosaurus -- The Adventures of Yuriko Kumage During the Greatest War on Earth" (which wouldn't have been created without Bloomberg's existence) or just pumping her finance for the long term, Kylie Minogue did hold the business umbrella that day---a Bloomberg umbrella. 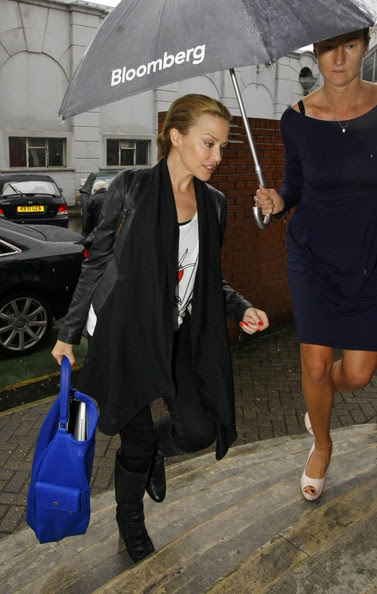 When a picture like that comes our way, we just say "Kylie made a move" on the Shougi (Japanese chess) board. The photo was forwarded to Bloomberg Hong Kong (HKT) and Bloomberg Japan on Monday (JST).

CNBC: Erin Burnett Welcomes Cramer Back -- "What Did They Expect He Was Going to Do? Go Home? What Were They Thinking??" September 08, 2010 JST

BLOOMBERG: Erin Burnett Welcomes Cramer Back -- "What Did They Expect He Was Going to Do? Go Home?!! What Were They Thinking??
September 08, 2010
"They" (in this case) were Hewlett-Packard. Jim Cramer returned to CNBC with honest comments about Mark Hurd going to Oracle America Inc. Erin Burnett was the anchor. I think $98.6 Million USD is an easy 10% of a Billion. Sounds right, quite happy with that...I mean what were they thinking?

Embedding provided by CNBC with permission.

Bloomberg disabled the embedding for the video that presents the interview. The interview was uploaded to one of the defendants, YouTube LLC; however, the company, Bloomberg L.P., has to provide a link by doing so. Make note that YouTube modifies material of a user’s choosing. For more information, please access the following links concerning this patent infringement case below: 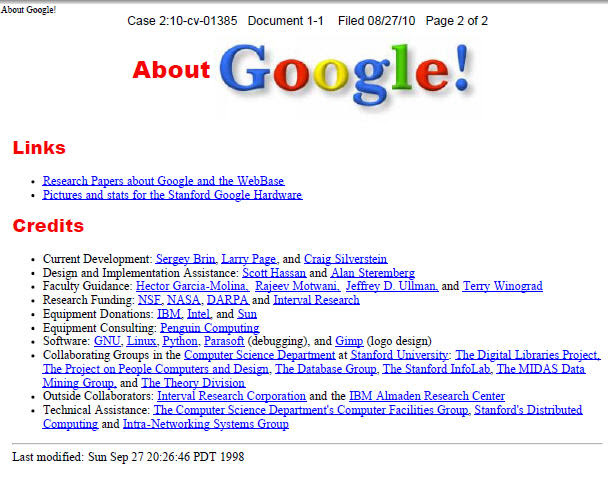 VIACOM FILES NOTICE OF APPEAL With US District Court of Southern New York (Manhattan) Against YouTube/Google to The Second Circuit Court of Appeals!!

To see the document, click here: Viacom's Notice of Appeal

LDP Wins Upper House of Counselors --- Renho Landslide Win Retains Her Upper House Seat -- July 12, 2010 JST!
The Liberal Democratic Party (LDP (aka: 自民)) of Japan has won the Upper House of Counselors election in Japan, defeating the Democratic Party of Japan's (DPJ (aka: 民主)) chance at a super-majority to push policies through. It has been reported that the DPJ are seriously worried about Japan's national debt, currently more than twice that of its Gross Domestic Product (GDP), and in an effort to lower it pushed a platform of higher income taxes and a hike in the consumption tax (the equivalent of a sales tax) from the current 5% to 10% over a period of time.

Two notable elections were the landslide wins of two (2) women in the Tokyo Metropolitan Area for the DPJ and inside the representative proportion of the Social Democratic Party (SDP). 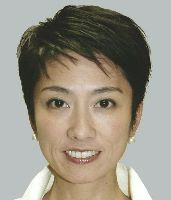 Renho (蓮舫), who is currently the head of the government's consumer affairs, won by a landslide with over 1.7 Million votes (over 28%), where the runner up of the "Fairness & Justice Party", Takeya Toshiko, winds up with a new seat at over 800,000 votes (over 13%)---there were twenty-four (24) candidates running against her. Five (5) candidates had to be chosen out of the pool of twenty-four (24).

For further results for the remaining candidates in The Tokyo Metropolitan Area, please access this link (Japanese 日本語): http://www.yomiuri.co.jp/election/sangiin/2010/profile/ye13004.htm 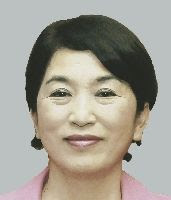 For the Social Democratic Party, Fukushima Mizuho (福島 瑞穂) keeps her seat with 60% of the votes.

For further results for the remaining candidates in The Social Democratic Party, please access this link (Japanese 日本語): http://www.yomiuri.co.jp/election/sangiin/2010/profile/yb002001.htm

CONCLUSION: Japan's Upper House of Counselors is similar in contrast to the US Senate if one were to breakdown the Japanese government. The country's Lower House---like that of the US House of Representatives---has more political strength than the Upper House, however the Upper House has the power to block many bills from passage, except for treaties and budgets. Unlike the US President, the country's prime minister is not elected by the people, the majority in power elect within their membership whom the prime minister will be, as is the case inside most parliamentary democracies. In the last five (5) years since Prime Minister Junichiro Koizumi (LDP), the remaining prime ministers lasted approximately one (1) year. Those were Shinzhou Abe (LDP), Yasuo Fukuda (LDP), Taro Aso (LDP), and Yukio Hatoyama (DPJ). Before Koizumi, Yoshirō Mori (LDP) also lasted one (1) year. The current prime minister is Naoto Kan (DPJ).

Surnames were presented last in the previous paragraph.

WHAT ARE THE KKXG: KING KONG VS GIGANTOSAURUS OFFICIAL NOVEL & EIGHT (8) SCREENPLAYS?

For complete information on the intellectual property known as KKXG: KING KONG VS GODZILLA (Original & Official Screenplays), the KKXG: KING KONG VS GIGANTOSAURUS (American Screenplay Versions and the Official Novel), their associated KKXG Law Thesis, and their Mathematical Induction Proof that proves success without contradiction, go to the OFFICIAL HOMEPAGE which pushes both, one for Japan, one for The United States:

To purchase the novel, please click the KKXG logo, the CreateSpace (publisher) logo, the AMAZON.COM logo, or THE AMAZON ***KINDLE*** logo below:

You now can read KKXG from your computer or through the following mobile devices with the appropriate, free Kindle app
(click the link to get the app):

The KKXG: King Kong vs Gigantosaurus Official Blog with updates on the content is here:

For more information on SHADO CONTROL, the website that solicits, hosts, and is the official management for this content (which is king), with the addition of tons and tons of information about many other areas of interest since 1995, please go here:

THANK YOU FOR YOUR SUPPORT!!
To send comments, use the email address below.

ABOUT THE FOUNDER OF SHADO CONTROL AND THE AUTHOR OF KKXG: KONG KONG VS GIGANTOSAURUS

ALAN COLOSI 「米国家城の作家」
Alan Colosi is a Cum Laude BA graduate in Computer Science with Japanese as the foreign language from BOSTON UNIVERSITY, The College of Arts and Sciences (CAS '00). Having traveled to Japan 88 times from Boston, MA, USA with over 3 Million miles as an Emerald Member with The One World Alliance, Mr. Colosi maintains countless years of computer programming, radio, media, market research and journalism experience integrating both English and Japanese. Prior to BOSTON UNIVERSITY, Mr. Colosi worked at radio stations WXKS-FM, Boston, MA as a core programmer (1984 - 1988) and KISS-FM LONDON (as a reporter 1991-1993) and currently is the owner and operator of SHADO CONTROL ... http://www.shado-x.com ... maintaining the site for over 15 years with business news and information, merchandise sales, and advertising in the field emphasizing science, the arts, and business analysis by constructing mathematical theory with successive growth. The current extension of SHADO CONTROL is the business plan push of KKXG: KING KONG VS GODZILLA and KKXG: KING KONG VS GIGANTOSAURUS, after receiving very important blessings for it to succeed...either way.

All information as to the story behind the making of "KKXG: King Kong vs Gigantosaurus" and "KKXG: King Kong vs Godzilla" is Copyright © 2006-2010 ALAN COLOSI and registered in the US Copyright Office. ALL RIGHTS RESERVED. The copyright disclaimer is also located on The Official KKXG Homepage at:
http://www.shado-x.com/kkxg.html

"KKXG: King Kong vs Godzilla" and "KKXG: King Kong vs Gigantosaurus" (The Official Screenplays), and "KKXG: King Kong vs Gigantosaurus" (The Official Book/Novel), a work of compilation, is Copyright © 2006-2010 ALAN COLOSI, registered in the US Copyright Office, and registered in the Writers Guild of America West. ALL RIGHTS RESERVED. These products are protected by valuable intellectual property rights as registered copyrights including, but not limited to copyright and/or trade secret rights. No part of these products may be reproduced, stored in a retrieval system, cached, distributed, or transmitted in any form by any means, electronic, mechanical, photocopying, recording, or otherwise. These products may not be resold, repackaged or redistributed. All prima facie evidence exists.

These are Prima Facie US Registered Copyrights and protected by Intellectual Property Law.